These are the most common runs we do during the season:

Starts at the track. Run west to 8th Ave. Turn left on 8th and go south to Bromley. Cross at the light and turn left to go east on Bromley to Chambers. Turn right on Chambers and run AGAINST traffic as you go south to the ditch at the crest of the hill. Turn right onto the ditch and go until you hit 144th ave. Turn around or continue on the ditch to Sable for 4 miles total or continue across 144th and stay to the left of the ditch until you come to Sable (5 miles). Longer runs will take you over Sable along the ditch to 136th Ave. www.usatf.org/routes/view.asp?rID=374742 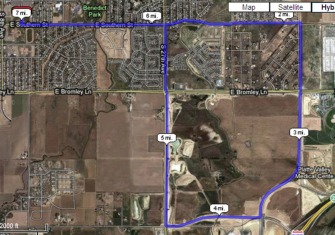 Bridge Run (see below for the two options)

Bridge Run Right to Hwy 85
Going right will take you north along the river bike path until you get to Hwy 7. Turn around and go back the way you came. www.usatf.org/routes/view.asp?rID=374751

Going left from the park on Southern and the river will take you behind Kmart to Bromley. Run east on Bromley (be very careful as you cross Hwy 85 on Bromley) until you get to 8th St. Turn left on 8th and run north until you get to Southern.   www.usatf.org/routes/view.asp?rID=374845
Create Routes or Search for a route from millions at MapMyRun